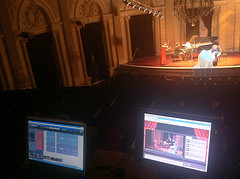 If good capture is achieved a good transmission should be guaranteed also but not without taking into account internet connectivity. Obviously internet connectivity is very important when it comes to streaming such events with such high resolution standards so the best bet would be a high speed cable connection. Wireless Internet may also be used in some situations if nothing else is available but its not advised.

The problem with broadcasting via WIFI is that transcoding servers (CDN) can handle a certain amount of data oscillations but if using WIFI which can have an extreme drop of signal, the oscillation to this amount of data being transmitted will remain with its decreased data.
(i.e. video and audio resolution is decreased during transmission, and drops of signal can occur until refresh is made which will stop and re-start the transmission)

Although Daria´s recital was not transmitted it was established that a video resolution of 720p would make justice to images that were being captured by the HD cameras without hindering the live transmission, together with a frame rate of 30fps while 320Kbps mp3 audio proved to make a smooth stream without interruptions. Even a single millisecond interruption will disrupt the viewing and recording as well. So transmission must be seamless from beginning to end.

In the case of slower connection or problems with network provider a compromise in streaming quality must be done and video/audio resolution maybe adjusted.

Transmission will have Livestream website as destination, site which offers several possibilities for channel production like the flash player embeddable anywhere using a simple HTML code. Of course an alternative is host or server space in which case a custom video player must be arranged.

Streamline only provides the technical service so copyrights must be always granted by all parties involved including production.

A great advantage of such live streams is the possibility to further edit and produce the material since all is captured in high quality which allows for the production of DVD video of the performance, Audio CD or both.

In this case 4 audio tracks where used in combination with 3 video cameras so there are multiple possibilities regarding post-production. In the case of and orchestra or larger ensemble more audio tracks and microphones may be used which will lead to the eventual mixdown of the several tracks to a single stereo.

The Lunch Concert was a great opportunity to try out this set up which proved to be very efficient to transmit events of this kind where refined music is at order. It is obvious that a piano recital with pieces by Handel must be perfect (without interruption or buffering time) to keep its musical integrity.

It is also a strong indicator that this will be common procedure at concerts and events everywhere in the near future as internet connections grow faster and bandwidth broader.

A warm thank you to Jorinke van Deelen, Daria van den Bercken and the technicians at Het Concertgebouw who assisted in these recordings and try-outs. All are for educational purposes only.