These elements combined represent what the band is all about.

Live music to make you dance, experience the newness and simply enjoy!!!
The debut-album of City Safari Blue, simply called “CSB” (release: spring 2011) reflects a two year process during which the band developed their authentic groove.

They seamlessly blend different styles of house-, world- and jazz-music, into stories of life (Felicidade), love and emigration (Zunga).

These songs not only tell us about the hardships, but also about all the good things that life has to offer. Making people dance, laugh and party.  Sung in  different languages ; English, Brasilian-Portuguese and Capeverdian.

It all began in Barcelona. The city of Dali, Picasso and Gaudi inspired founder Camilo to write the first sketches of the album. He then returned to Rotterdam/ the Netherlands to form City Safari Blue. Most of the members had played together before, backing different artists.

They discovered that they had a very similar taste of music and that they all wanted to take it beyond the level of just playing. They started composing music together and were surprised by the vibe they could create, mixing dance/disco rhythms with jazzy chords and afro-beat, broken beats with soulful vamps…

In 2010 the band performed on all different kind of festivals like Dunya Festival (as the winner of “Dunya on Tour”), Gideon Festival and Wantij Festival (clubnights). They also played in smaller venues and clubs like “de Unie” (North Sea Jazz Roundtown) and “Westerlijk Handelsterrein” (Queensnight).

Be on the lookout for the new album and remixes! 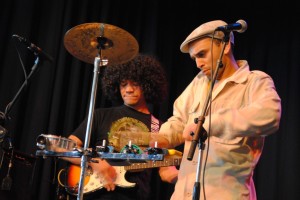